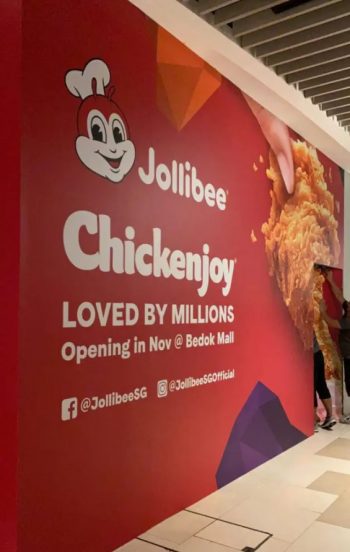 Jollibee Singapore is having their Opening Promo at Bedok Mall. Jollibee S’pore latest outlet in Bedok Mall slated to open in November, the 4th outlet in the east.

That’s right – the popular Filipino fast-food chain Jollibee will be opening soon in Bedok Mall. It will be their 4th outlet in the eastern part of Singapore after Paya Lebar Square, Changi City Point and the upcoming Century Square.

It will be located in basement 2 of the mall, next to Pizza Hut and coincidentally taking over units formerly occupied by KFC which had moved out to open in Bedok Town Square a few years back.

According to the Jollibee renovation hoarding, the new outlet is scheduled to open in November later this year.

For those who haven’t tried Jollibee’s food before, they are known for their Chickenjoy fried chicken, Jolly Spaghetti and Yumburger.

There’s still a good few months before Jollibee Bedok Mall opens and if you are craving some Chickenjoy in the meantime, you can find them at these locations:

Now till 3 Oct 2021: Art-Zoo Wonder Gardens at Gardens by the Bay