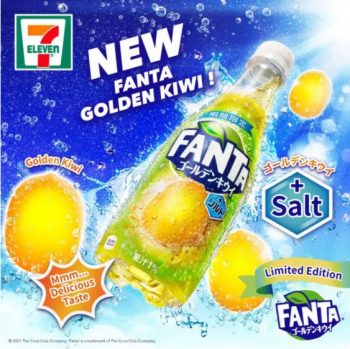 7-Eleven Malaysia is having their Fanta Golden Kiwi Soda Promo. You probably have tried the usual Fanta flavours such as Orange, Grape or even Pineapple but here’s one you probably never heard before.

Fanta Golden Kiwi Flavour
Available only in the Japanese market previously, the limited-edition Fanta Golden Kiwi is now available in 7-Eleven stores in Singapore. It even comes with a pinch of salt added as part of the summertime release.

It was introduced in Japan back in August this year and has only been spotted in a few other countries.

According to the label, it has 1% real juice (kiwifruit juice) so it’s not entirely just flavouring.

Available at: All 7-Eleven outlets in Malaysia